The mayor of the municipality of Santiago, Edelmiro Leal Cavazos, was deprived of his liberty by gunmen who came to their home uniforms apocryphal particular federal agents.

At a press conference headed by the governor, Rodrigo Medina de la Cruz, the owner of the Attorney General of Justice of the State (PGJE), Alejandro Garza y Garza, said the incident occurred at midnight on Sunday in this town south of Monterrey.

He said that armed men on board about seven trucks came to the home of the mayor, where he was forced to board one of the vehicles.

This, he said, according to the version of a bodyguard of the mayor and the strangers who got into the trunk of a vehicle, to then leave in freedom.

According to initial investigations, said Garza y Garza, about 15 individuals dressed in caps and vests of the PGR participated in the illegal deprivation of liberty which apparently beaten or handcuffed the PAN mayor of extraction.

According to own bodyguards of Citizen Services, to be "encajuelado" perceived that took a tour on paved roads and then through a gap and then release it within the limits of the municipalities of Santiago and Monterrey.

The holder of the PGJE said that since early hour we proceeded with research to trace the whereabouts of President municipal.

He stressed that even when one has no call from the kidnappers, so you can not define the modality of this illegal deprivation of freedom or purpose thereof.

The holder of the PGJE remarked that contacted the PGR and the Secretariat Cisen Marina to verify the performance of some operating in the area that used clothing before the offenders.

However, he said that this possibility was rejected in those units.

The mayor of Santiago was last seen last night after participating in a cultural event in the plaza municipal ended shortly after 22:00 hours and then went to his home, where he was deprived of his liberty.

More than 15 people, who were identified as elements of the Federal Judicial Police (disappeared about nine years), participated in the events, officials of the state.


The Attorney General, Alejandro Garza y Garza, confirmed the disappearance of the mayor of Santiago, Edelmiro Cavazos, and ruled that until the moment it is a kidnapping.

In a press conference accompanied by Governor and Rodrigo Medina de la Cruz, and the Secretary General of Government, Javier Treviño Cantú, the authority reported that there were more than 15 subjects who deprived him of liberty.

According to initial investigations, the strangers arrived to his home, identified as elements of the Federal Judicial Police (disappeared about nine years ago), and took him to an unknown destination.

Alejandro Garza Garza explained that the information obtained was derived from statements made by a security guard at the house of the mayor, who also was raised by the subjects and made him walk a few minutes before leaving to one side of National Highway.

"(The guard) tells us that last night, at approximately 24:00 hours, there were about seven vehicles, which used straps, so the concerns have been leaning guard (to see what happened), entered several subjects, approximately 15 subjects, they all dressed in his dress, wore hats of the PGR, wore vests, referring them to be elements of the federal judicial police, there is already completed about nine years ago.

"... The time to see the lights, strobes, also left the mayor of his home to see what happened, two men headed toward him, grabbed his arms and took him to one of the trucks. Security guard, he put him in the trunk of a vehicle referred to it walked about 15 minutes walk, on paved roads, then felt they had entered a time through a gap and then again referred to was in a paved street, opened the trunk and let go. The person reported having been beaten, handcuffed him not. "
Top

Re: Federal Judicial Police kidnap the mayor of PAN in NL state.

So more than 15 people that identified themselves as Federal Judicial Police that allegedly disappeared 9 years ago, kidnapped the mayor of the PAN party in NL state.

Here is the picture of the mayor of NL state: 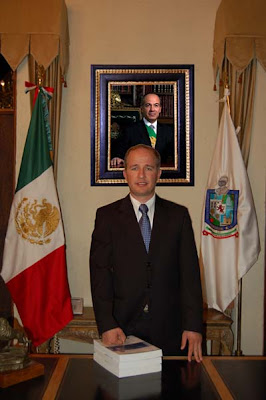 Here is the source where I go it from, I forgot to post in my first post.http://www.blogdelnarco.com/2010/08/lev ... lmiro.html