This documentary is about Rio Piedras State Penitentiary in Puerto Rico The conditions there were terrible. Lots of victimization, lots of overcrowding

The movie confirmed the stories an old Latin King told me regarding the Insectos or Grupo 27 or G27 and how the Ñetas were created by Carlos La Sombra. 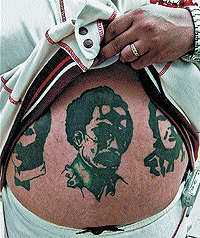 Also he talked about how they would cut up bodies and flush them down the toilet. I thought maybe it was just tall tales but the movie confirms it was done. the bones were broken up by putting them in pillow cases and swinging them against the wall until the bones were down to flushable size
Top

who produced this documentary. I want to get the DVDs for the website if it is good.
Top

To me why I liked it is there's not a lot of docs that show PR culture outside of NYC. It really shows the character of the people on the island.