WASHINGTON (AP) — Hillary Rodham Clinton told colleagues Tuesday she would consider joining Barack Obama as his running mate, and advisers said she was withholding a formal departure from the race partly to use her remaining leverage to press for a spot on the ticket.

On a conference call with other New York lawmakers, Clinton, a New York senator, said she was willing to become Obama's vice presidential nominee if it would help Democrats win the White House, according to several participants in the call.

Clinton's remarks came in response to a question from Democratic Rep. Nydia Velazquez, who said she believed the best way for Obama to win key voting blocs, including Hispanics, would be for him to choose Clinton as his running mate.

"I am open to it," Clinton replied, if it would help the party's prospects in November. Her direct quote was described by two lawmakers who spoke on condition of anonymity because they were not authorized to speak for Clinton.

Clinton also told colleagues the delegate math was not there for her to overtake Obama, but that she wanted to take time to determine how to leave the race in a way that would best help Democrats.

"I deserve some time to get this right," she said, even as the other lawmakers forcefully argued for her to press Obama to choose her as his running mate.

Joseph Crowley, a Queens Democrat who participated in the call, said her answer "left open the possibility that she would do anything that she can to contribute toward a Democratic victory in November. There was no hedging on that. Whatever she can do to contribute, she was willing to do."

Another person on the call, Rep. Jose Serrano of New York City, said her answer was "just what I was hoping to hear. ... Of course she was interested in being president, but she's just as interested in making sure Democrats get elected in November."

Rep. Charles Rangel, a devoted booster of Clinton who helped pave the way for her successful Senate campaign, said he spoke to her Tuesday and got much the same answer.

"She's run a great campaign and even though she'll be a great senator, she has a lot of followers that obviously Obama doesn't have, and clearly the numbers are against her and so I think they bring all parts of the Democratic Party together and then some," Rangel said.

Aides to the Illinois senator said he and Clinton had not spoken about the prospects of her joining the ticket.

Obama effectively sewed up the 2,118 delegates needed to win the nomination Tuesday, based on a tally of pledged delegates, superdelegates who have declared their preference, and another 18 superdelegates who have confirmed their intentions to The Associated Press. It also included five delegates Obama was guaranteed as long as he gained 15 percent of the vote in South Dakota and Montana later in the day.

Word of Clinton's vice presidential musings came as she prepared to deliver a televised address to supporters on the final night of the epic primary season. She was working out final details of the speech at her Chappaqua, N.Y., home with her husband, former President Bill Clinton, their daughter Chelsea, and close aides.

Earlier, on NBC's "Today Show," Clinton campaign chairman Terry McAuliffe said that once Obama gets the majority of convention delegates, "I think Hillary Clinton will congratulate him and call him the nominee."

Clinton will pledge to continue to speak out on issues like health care. But for all intents and purposes, two senior officials said, her campaign is over.

Most campaign staff will be let go and will be paid through June 15, said the officials who spoke on condition of anonymity because they were not authorized to divulge her plans.

The advisers said Clinton has made a strategic decision to not formally end her campaign, giving her leverage to negotiate with Obama on various matters including a possible vice presidential nomination for her. She also wants to press him on issues he should focus on in the fall, such as health care.

Universal health care, Clinton's signature issue as first lady in the 1990s, was a point of dispute between Obama and the New York senator during their epic nomination fight.

Obama could also look outside the party to people such as anti-war Republican Sen. Chuck Hagel of Nebraska or independent New York Mayor Mike Bloomberg. Or he could look to one of his prominent supporters such as former Sen. Tom Daschle of South Dakota or try to bring on a Clinton supporter, such as Indiana's Sen. Evan Bayh or retired Gen. Wesley Clark.
Top

Some some 'in TRICK!!

i like the small cash donor heal, and the hope attack lol...

i like the small cash donor heal, and the hope attack lol...

lmao Im registered on two sites that have like 300,000 members combined.

It's going to be an interesting race now. Socialistic authoritarianism versus neo-conservative crackpotism. Either way America loses but what a run to the finish line. Oh can I still say that without picking up a case for "hate speech"? 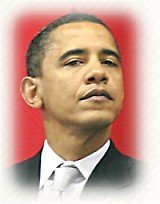 I'm watching you Old Shatterhand. Big Brother will find a way to incarcerate you for saying naughty things against me.
Top

Old Shatterhand wrote:It's going to be an interesting race now. Socialistic authoritarianism versus neo-conservative crackpotism. Either way America loses but what a run to the finish line. Oh can I still say that without picking up a case for "hate speech"?

I'm watching you Old Shatterhand. Big Brother will find a way to incarcerate you for saying naughty things against me.

Hows Obama an authoritarian socialist? I mean he is a liberal but i havent heard any socialist statements from him.
You should come to Europe and i ll show you some real socialists hehe