The controversial police chief Julian Leyzaola appears to have faltered as new Secretary of Municipal Public Security, after being appointed to the post just this March 10 in the city of Ciudad Juarez, considered one of the most dangerous cities in the world.

His personal bodyguards are accused in the kidnapping and the disappearance of 4 young people not older than 27 years, which were forced in to the municipal police cars 540, 420, 417, 506 and 509, but, to date, their whereabouts are unknown.

The victims are described as Félix Vizcarra, Dante Castillo, Juan Carlos Chavira and Raúl Nevárez, whose relatives filed a formal complaint Tuesday with the Justice Department and said they feared for their lives.

Neither the Municipal Police nor the City Hall have responded to the matter.

The abductees are 3 employees of Nextel and a mechanic, who were abducted on Saturday by a commando of municipal police officers in a market on the street De la Paz, in the community of breaking Oasis Revolución. 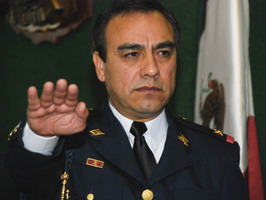